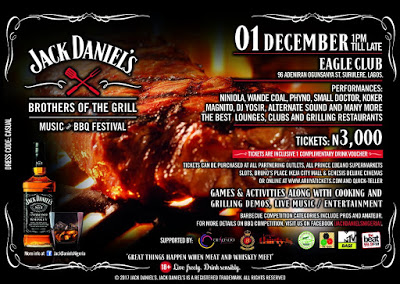 15 End of the year concerts in Lagos you don’t want to miss!

0 people shared the story
0
0
0
0
What’s Popping Lagos! We are days away from the end of the year! Can we say Happy new year in advance already?! As we approach that time of  the year which we love the most, we are gearing up for an amazing holiday.
Because we love you, want you to have fun, Live Lagos and Enjoy Lagos, we have specially curated this list to guide you this period. This is coming early so you can make proper arrangements and probably ditch going to the village in December. (Lol)
There are events we always expect every year and there are others that are just getting our attention for the first time this year.
Regardless, we would be having massive fun this December. Be rest assured!
1. DEC 1ST- JACK DANIEL’S BROTHERS OF THE GRILL
Jack Daniel’s Brother’s of the Grill is the biggest Music and BBQ Festival in Lagos! With several gigs this year, this edition promises to be the biggest yet and guess what they are bringing the fun to the mainland. One time for the mainlanders.

Eagle club, Surulere is the venue and 3k gets you in with complimentary drinks and BBQ and did we mention the lineup yet? Niniola, Wande Coal, Phyno, Small Doctor and others!

TIP: Be sure to book your tickets early, wear comfortable clothing and be extra careful with your belongings.
2. DEC 7TH- MALEEK BARRY LAST DAZE OF SUMMER CONCERT
Maleek Berry’s music has performed so well in and out of the country this year. From performing at the Made in America concert to touring UK and getting recognized at the MOBO Awards. Berry is bringing Eko Miami this December at the Last Daze of Summer concert.
Venue is Hard Rock Cafe, Victoria Island. Tickets available from 5k. Visit www.eclipseliveafrica.com for more information.
3.DEC 7TH- REMY MARTIN EXTRAVAGANZA

The last Remy Martin extravanganza was super fun! This time, Remy Martin is pulling all the stops, bringing all the fun from the previous parties with the inclusion of themed pirates of the Caribbean set, more Michael Jackson sets and a Game of thrones set! Date is December 7th, 2017 at the Balmoral Conventional centre, Federal Palace Hotel, Victoria Island. DJ Maphorisa from South Africa, DJ Big N and DJ Baggio are confirmed to keep you dancing the whole night and Tiwa Savage and Davido will be shutting it down with all their hit songs!
TIP: Get your tickets from participating night clubs and get ready to experience magic! Trust us!

4. DEC 9TH- BRYMO LIVE
Brymo is one artiste with a special following, we are all eager to see him perform. He will be supported by some other acts on the night. Concert is taking place at TerraKulture, Tiamiyu Savage, Victoria Island on the 9th of December.
TIP: There are limited seats so book tickets on time.
5. DEC 10TH- WIZ ON THE BEACH
We literally live for this! Whaaat?! Wizkid! Headlining a show! (where’s that piggy bank?)We assure you this is that one event you should empty your accounts for. We love the fact that it’s a beach concert so we are not getting the regular Eko Hotel concert vibes. We are really hoping this event emulates Top beach concerts all over the world.
Date for Wiz at the Beach is December 10th from 6pm! Tickets sales will be announced here soon.
TIP: Tiwa Savage, Burna Boy will also be performing. It’s a ‘belleful’ concert.
6. DEC 17TH- BURNA BOY  SHOW LIVE IN CONCERT
We just realised that Burna Boy has not headlined a concert in Lagos. (Please correct us if we’re wrong) Apparently, this is his first so we are looking forward to a lot of things. (Performance, audience, concept and more)  We are really eager to see the turn out because you know Burna has a questionable reputation according to the media.
Anyway, if youre a fan, please be quick to get your tickets or book your tables it’s 10k only for regular and 25k for VIP.
TIP: Get early bird tickets at N7500.
7. DEC 15TH- THE UNOFFICIAL CHRISTMAS PARTY
The Unofficial Christmas Party is for small companies to experience an end of the year party at a great cost. The party will typically include a four-course meal, entertainment and after-dinner party. This year is themed “Party In White” a modern, classy party. There would be performances from  Tiwa Savage, Bovi, DJ Big N and DJ Cuppy so get your company to book a table by emailing info@theunofficialchristmasparty. Date for the UXParty is Friday, 15th December, 2017 from 6pm at The Landmark Centre, Water Corporation Road, Oniru, Victoria Island.

Rhythm unplugged is the truth!. Unargualbly one of the most consistent end of the year concerts in Lagos!  Rhythm unplugged is back this year ! The show has had international artistes like Trey Songs, Wyclef and more. This year will be featuring The Big  shaq,  Michael Dapaah. Other acts include Wizkid, Davido, Olamide, Runtown, Wande Coal, Tiwa Savage, Ycee, Maleek Berry, 9ice,  Simi, Niniola, Small Doctor,  Dj Obi, Dj Cuppy and more.
Venue is definitely Eko convention centre on the 22nd of December.  Regular tickets at N7,500 and VIP – N25,000
TIP: Make sure to make a late appearance, show usually starts late.
9. DEC 24TH- WIZKID LIVE
And it gets even better! Starboy is having his own concert. We all know this is wayyyy overdue, like we were  really anticipating this last year but Wizzy canceled. This year, we are here to experience Starboy himself. Who knows, he might bring in one of his famous superstar friends, Maybe Wale or Major Lazer or even Drake?
Wizkid Live is slated for the 24th of December at the Eko Convention centre. Tickets are N7500 for regular and N25,000 for VIP
10.  DEC 24TH- BEZ LIVE: THE ART OF MUSIC
Experience the art of music with Bez at Bez Live! We assure you it’s going to be magical! Bez has proven to be an exceptional performer through out his career. If you love good music, then plan to attend as nothing but Good vibes await you at this concert. We are quite positive about the audience too, we can’t say the same about the venue tho.Concert will take place on the 24th of December. Tickets are just 5k for regular and 20k for VIP. Venue is Muri Okunola Park, Victoria Island.
11. DEC 26TH-  ONE NIGHT STAND WITH ADEKUNLE GOLD
Adekunle Gold has impressed everyone so far this year, with sold out concerts, new singles and his fans are still asking for more.
Adekunle seeks to impress us since his move from his previous record label Olamide owned YBNL Records. We absolutely cannot wait to see what Mr Adekunle has in store at his concert.
The One Night Stand Concert will be happening at the Balmoral Hall in Federal Palace PRemises, Ahmadu Bello Way, Victoria Island on the 26th of December. Tickets are N7500 for regular and N20,000 for VIP.
TIP: Get early bird tickets at 5k only.
12. DEC 26TH- EAT DRINK FESTIVAL
Eat Drink Festival returns on Boxing day! Enjoy delicacies from over 30 food and drinks vendor. We are really hoping this year’s edition is more organized. Although, location has not be publicized yet, we will fill you in when due.
TIP: Come with enough cash, your ATM card and friends !
13. DEC 27TH- DAVIDO 30 BILLION WORLD TOUR LAGOS FINALE
After successfully touring major cities across the world, Davido finally ends his 30 billion world tour in his own city, our city, Las Gidi!
We are suspecting a competition between him and you know who(we aren’t a gossip blog) Both are having a concert that same period, It’s time to know who’s got the most fanbase.
Davido’s concert will be at the Eko Convention centre on the 27th of December! We are definitely in for a night of hits! Tickets bookings and sale will be communicated.
TIP: If you’re going for a Davido concert you might want to look the part, based on ‘TARTY Billion for the akant!’
14.OLAMIDE LIVE IN CONCERT
Truth be told, no one can say they do not like Olamide. If you don’t like his music you will definitely like his person. There is a lot to the brand Olamide and Nigerians are super proud of that. OLIC is one concert everyone looks forward to at the end of the year and this is the 4th year running, Little wonder why it’s always sold out. (The last edition was a carnival!)
Although we are not quite sure about the date but rest assured we will be the first to let you know, so stay peeled.
TIP; OLIC is not for the faint hearted. Come with all your guts and be ready to dance the night away. From Shakiti Bobo to Wo!
15. ONE LAGOS FIESTA
It is safe to say this is Lagos End of the Year carnival for us. Everyone in our city gets to experience and see their favourite artistes perform (even grassroots artistes) The One Lagos Fiesta is spread over 8 days in different locations in the state. We are really anxious to see this year’s edition. The biggest stars in Nigeria all perform at this gigs so get ready and it is absolutely free! We will communicate deets as soon as they get in. Fingers crossed!

MARK THE DATES LAGOS, YOU’RE IN FOR A LIT DECEMBER!
LIVE. LAGOS!!