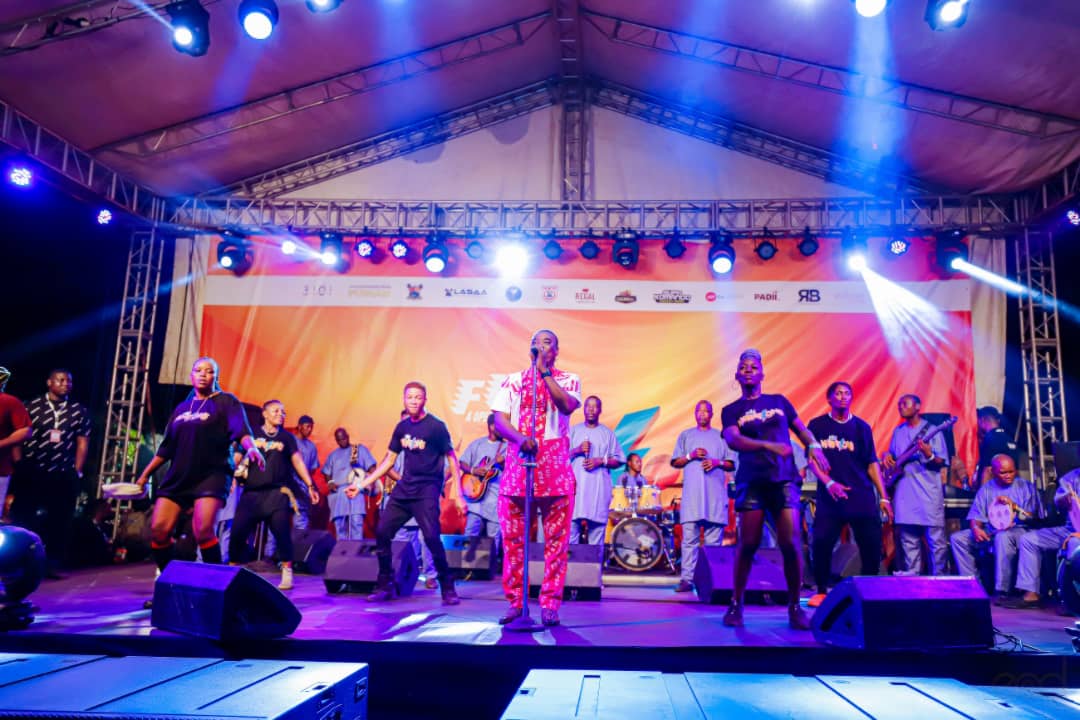 Fuji Vibrations Delivered The Finest Fuji Music Like Never Before To A Crowd Of Over 3,000 People.

IN LAGOS, FUJI VIBRATIONS REINTRODUCED THE FUJI MUSIC GENRE TO A NEW AUDIENCE OF TECHNOCRATS, BUSINESS PROFESSIONALS, AND THREATENERS.

Fuji: A Opera held its third edition of Fuji Vibrations on December 8, 2022, at Muri Okunola Park in Lagos, to a diverse group of distinguished guests.

The night featured different generations of Fuji artists serving up their distinct Fuji styles to the delight of the packed house. Technocrats, industry titans, media moguls, tech entrepreneurs, visual artists, socialites, influencers, music journalists, thrill seekers, and Fuji music aficionados made up much of the audience.

Jide Taiwo, the host, praised Fuji music as a globally recognised genre and attributed its success to grassroots influence; he also teased the quality of the night’s lineup and promised the audience a night to remember.

The Queen of Fuji, Yeye Eniba, ushered in the night. She delivered a commanding performance that captivated the audience. Her stirring vocal prowess and quick dancing feet kept the audience glued to the stage as she slowly etched a mark on everyone’s hearts.

Omo Aje Wasiu, one of King Wasiu Ayinde Marshall’s (KWAM1) many protégés, delivered a performance that set him apart from the many who admire his music mentor. He exudes a welcoming calm, a command of his vocal that incites and excites, and the stage presence of a fully realised performance act.

Agba Awo Fuji is ten years old, has a band, and his backing vocals are performed by children his age. This young Fuji sensation held court and held his own, belting his voice and stretching his vocal cords like a pro. His quick rise to fame and the credibility of his act attest to the influence of Fuji music on young people and the genre’s long longevity.

Fuji represents fusion. The Maze Xtreme, a masked DJ duo, served up the Fuji sound via heart-pounding Electronic Dance Music (EDM) loops. They were the surprise act last year; this year, they earned their invitation by getting the guests up and dancing to familiar songs mixed with EDM for a sonic cocktail.

Then there’s Taye Currency. He understands how to rouse a crowd. To the teeming audience, his songs were as familiar as a door knock. They yelled, jumped, and screamed. He’d feign surprise at the crowd’s recognition of him, and then he’d dish out songs on songs. As he performed, he walked down the stage, shaking the hands of guests who sang his songs word for word. Taye enthralled the audience, earning him an encore.

SK Sensation, president of FUMAN, ascended the stage with members of the Fuji Musicians Association of Nigeria as they recited the Fuman anthem. He also expressed how excited the association was to collaborate with Fuji: A Opera on this edition and reassured support for future Fuji Vibrations editions. He told the audience how Fuji: A Opera came to be and spoke highly of the organisers.

Sk Sensation is a true Fuji artist. He took the stage and delivered a clinical performance that resonated with the crowd, which was eager to see KWAM 1 perform. In anticipation, his performance calmed and elevated the atmosphere.

Saheed Osupa would be a Fuji music teacher if he wasn’t a brilliant Fuji musician, teaching the delicacies and niceties of the Fuji music genre in queens English. King Saheed Osupa, on the other hand, is a master lyricist, worshipper, and poet. His love for his creator is evident in his lyrics. He would frequently teach about the history of the music genre and humbly explain his place in the large family tree. Saheed Osupa is well-liked because he understands when to be vulnerable and when to brag; with evidence. He frequently falls to his knees in worship; he understands grace. You don’t forget men who are both complex and simple.

Malaika is a fantastic musician and performer in KS1. His command of his band demonstrates his command of arrangement and cadence. Mr. Maliaka, we checked, must have a rotor on his waist that he twirls at the sound of his music. He’s a master, a true professional. His success on TikTok and other social media platforms with the song Ose Olohon demonstrates his comfort with fame and long-term relevance.

Do2Dtun, celebrity hype man and Supa Komando ambassador, unveiled the new one-liter Supa Komando pet bottle before introducing the Mayegun of Fuji Music, K1 De Ultimate, the night’s headliner. The hype man spoke about K1  De Ultimate’s efforts to keep the Fuji music genre alive, which drew rousing applause from the crowd, which was still on their feet at around midnight.

Fuji: A Opera organisers, sponsors, and Fuji musicians, along with K1 De Ultimate, posed for photos and cut a commemorative cake, which was cut at the spelling of FIFTY by over 3,000 guests at Muri Okunola Park.

K1 De Ultimate reaffirmed his unwavering support for Fuji: A Opera and bestowed fatherly blessings on the organisers. He prayed and assured the team of the support of Fuji musicians past and present.

K1 De Ultimate took the stage and sang his anthems. It started with a serenade and ended with a jive; he performed soulful Fuji music with music alphabets of Fuji that other acts had not explored. K1 De Ultimate is a consummate musician, a professional, and a vocal force to be reckoned with.

“Fuji Vibrations served as a reminder that the Fuji genre is still shaping popular culture and truly represents the best of indigenous Nigerian music. 3000+ people gathered in the heart of Lagos to celebrate music and its fascinating subculture “Fuji: A Opera was created by Bobo Omotayo. “But, more importantly, what we witnessed reminded us all that music can bring strangers together. These instances serve as reminders of Fuji’s ability to unite people “.

The night ended with Lagos vibrating in Fuchsia Pink Fuji prints created by guests in their own style and personality.

The visitors exited the park, chirping with anticipation of what the coming year would bring. What colour would be the theme for 2023, who would be the headliner, and so on?