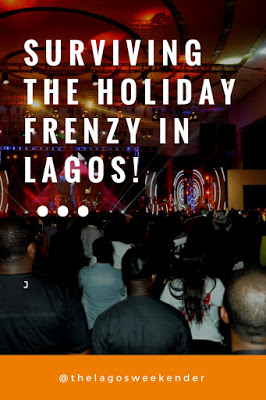 0 people shared the story
0
0
0
0
Lagos
can be likened to Los Angeles, New York, Paris and other big cities in the
world and one thing they have in common is the fact that they are always on the
move. The characteristic hustle and bustle everywhere, 24/7, and it’s even
about to get busier as the year is gradually winding to an end!
Everyone is
anticipating the holidays especially Christmas which comes with so much fun, merriment and definitely big and major gigs.
As fun and exciting Lagos can be during
Christmas, like nothing could ever go wrong, sometimes the unexpected happens
and it just kills the vibe. Be that as it may, we must make it a priority to enjoy
and actually survive any storm the holidays can come with…Can I get an Amen! So,
on this post we’ll be sharing few tips on surviving in this ever busy city this Christmas.

A
lot of crazy and bizarre (if we may say) things happen daily in Lagos, and it only doubles up during  this period. In a city like Lagos, you need to STAY WOKE! Be conscious
and vigilant wherever you are, in your hood and when you
are outdoors getting your groove on.

Cases of burglary and theft are most
common this season so be observant and raise alarm if you notice suspicious
movement and alert the appropriate authorities fast. Try not to go out all by
yourself this period, go about with people you are very familiar with. Do not flaunt
valuables or look too flashy in your appearance, wear minimal jewelry when you are out for an open to the public event. Keep phones, and other valuable items in purses or
wallets and hold on to them. Always park cars in authorized parking lots when
attending events. Do not keep packages of any form where they can be easily
seen in the car as this could send the wrong signals and your car gets destroyed
by thieves. In this season, events and shows go late into the night so for
security reasons, be sure to know you are attending an event with maximum
security guaranteed. Finally, Be very conscious when using the ATMs especially at night
time.
TIP2 :  AVOID TRAFFIC AS MUCH AS YOU CAN
Use alternative
routes to avoid traffic this Christmas as traffic escalates this period. Everyone wants to get to the next event, the next appointment and some are coming in from various parts of the world. So try as much as possible to avoid rush hours as much as you can. Figure out alternative routes, Use the BRT or even ‘keke’ if it gets you there fast.
Be very vigilant in traffic as well. Do not expose your valuables in the car so you don’t become a target for robbery.
·        TIP 3: PLAN AHEAD
Having
a plan this season CANNOT be over emphasized. Planning cuts across EVERYTHING! Christmas season being the busiest time of the year, in a city like Lagos
is going to be extra busy. So save yourself the stress of being caught up in
the rush hour moments. Make plans ahead and the sooner you start organizing
yourself, the better chances of surviving.
Draft a To-Do List, have a  budget Plan to monitor expenses, have a schedule.. Lastly,
regardless of all plans already made, have a plan B….yes there should be an
alternative or back up plan for every plan you have for the holidays as you
cannot predict any inconveniences.

TIP 3: BUDGET FOR THE HOLIDAYS
Even
if you have 30 billion for the account….you should have a budget for Christmas.
It’s a shopping spree season, and trust me, there are a million and one things
to buy but we must cautious NOT to overspend on the excuse that it’s
Christmas. In Lagos especially this season, everything becomes twice the price
as there’s this rush to make quick profit before the end of the year.
Having a
budget will make you determine how much you really should spend as to how much
you can afford for your expenses. You could shop in places where there is discount
for the holidays. Limit
the use of your credit cards, know how much you intend spending and stick to it.
We do not want to go broke by the end of the holidays do we?
TIP 4: DON’T EXPECT A PERFECT HOLIDAY
So
you already have great plans for the holidays and eagerly looking forward to it
but a last minute change(s) you never saw coming could just  leave you wondering if you would actually survive
the holidays. Well, there’s a saying that nothing is perfect not even Christmas.
Most especially in a very unpredictable city like Lagos, expect the unexpected!
With this in mind even if you get stuck in traffic for hours, or ATMs decide
not to dispense, or that event did not meet your expectations….whatever, Be
realistic and don’t get mad if it isn’t your
ideal holiday, Look on the bright side.. You’ll be alright!
·        HAVE FUN AND SPEND TIME WITH FAMILY
Not many
people can deal with Lagos wahala so if you can be indoors and have fun…. Why
not? Just have family and friends around, unlimited internet access,
uninterrupted powder supply and lots of food. Lol. But if you prefer being
outdoors and you don’t mind dealing with the stress of traffic, long queues, enormous
crowd, and so on, there are enough Lagos parties, shows, concert, and other
stuff you can engage in. Good news is some are freeeee so why not? Make arrangements for your killer outfits. Get tickets
early and make sure you not late to events so you can actually enjoy the show
as it starts and not halfway, and get the coolest spots. Whichever applies to
you, Christmas is FUN so have lots of it! Do all things in moderation, try not
to get so caught up with the crazy side of Lagos, and don’t overindulge in food
and/or alcohol, and DO NOT DRINK AND DRIVE.

Have a very merry Celebration ahead!

Drama, Fun, Tension on Airtel TV as ‘The Voice Nigeria’ Enters Episode 6 …music lovers can download the Airtel TV app to catch all the excitement

Oladotun Osafile: Restarting the Live Event Industry In Nigeria: Who is Willing To Bell This Cat?