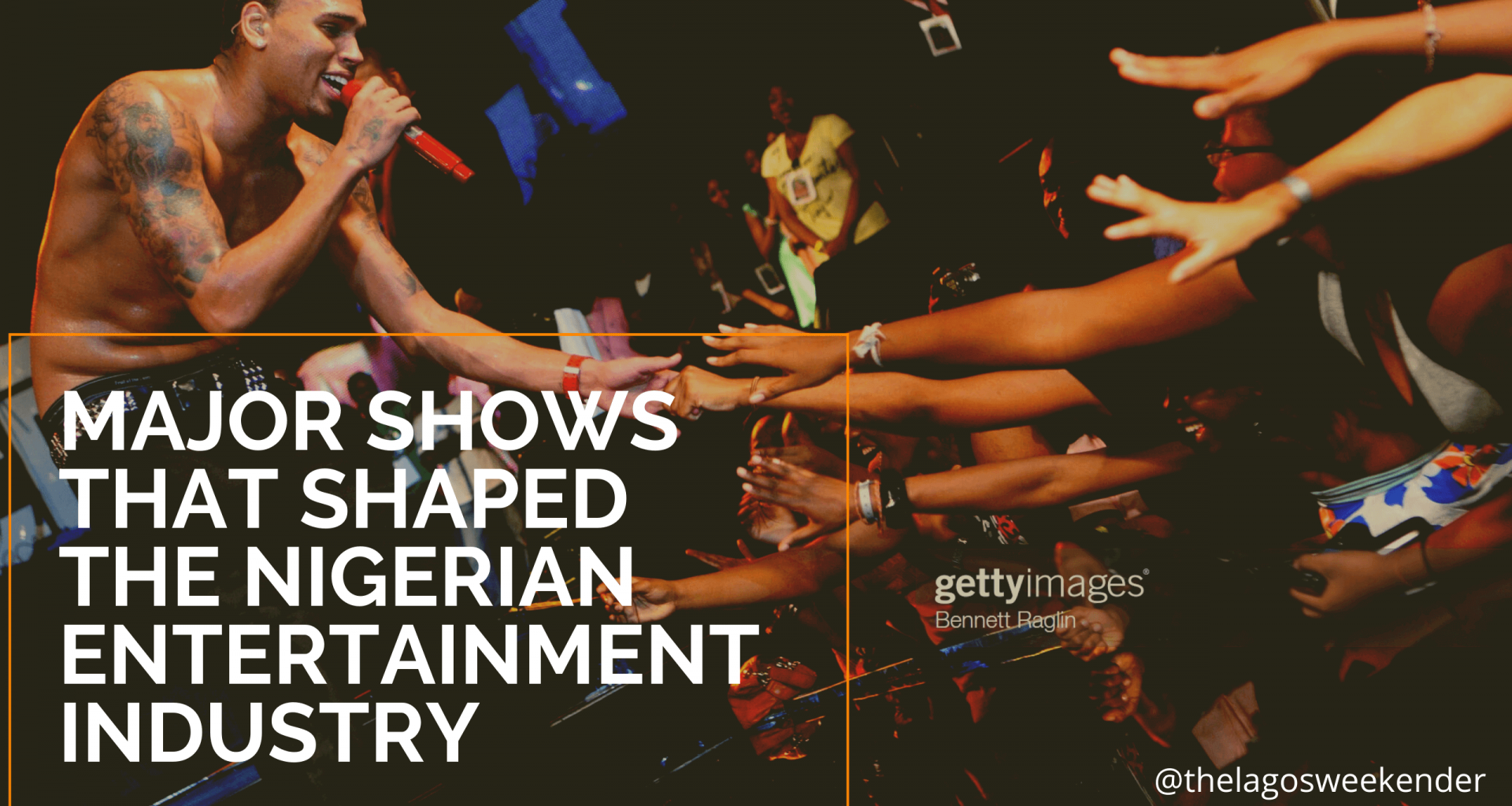 Throwback: The Biggest Shows that Shaped the Entertainment Industry in Nigeria

Every December, our city lights up with numerous shows, events and electrifying performances. It’s a boom time for the entertainment industry as most musicians, comedians, dancers and all are fully booked.

Let’s look back at some shows we enjoyed way back which created a pathway for the entertainment industry.

We have put together a list of live shows and concerts that have contributed to the success of a lot of our artistes/ entertainers and ultimately shaped the entertainment industry.

If you never experienced Star Mega Jam in the early 2000s, then you must have been under a rock or like some of us, underaged and could not attend the shows but we definitely saw the reportage in the media.

The Nigeria breweries sponsored event shook Nigeria every year and was highly anticipated largely because it featured performances by international musicians in both Lagos and Abuja. Some of the foreign artistes that performed at Star Mega Jam include Awilo Logomba, Shaggy, Usher, 50 Cent, Ja Rule, Kevin Lyttle, LL Cool J, Akon, T-Pain, Nelly, Nas, Busta Rhymes, Ludacris and more. The show also launched and boosted the careers of some of Nigeria’s biggest talents, including 9ice, Psquare, Dbanj, 2 face and many others.

The concert held between 2000 to 2010 before it was finally cancelled in 2011 due to logistics issues. Star Mega Jam will definitely remain on concerts goers mind for a very long time.

Created by Opa Williams in the 90s, Nite of a Thousand Laughs was Nigeria’s premier stand up comedy show. It launched the career of several comedians in Nigeria including Basket Mouth, I Go Die, Gordons, Basorge Tariah Jnr and was one major show a lot of Nigerians look forward to back in the day.

According to Opa Williams, the first edition of  Nite of a Thousand Laughs took National Arts Theatre in the late 90s.  The show became highly successful after a couple of runs but started to decline with the new wave of entertainers and internet penetration in Nigeria. (Probably because Nigerians started to crave for something different or more)

For a bit, Opa Williams tried to revive the show but it was not as successful as it used to be especially with the influx of new generation comedy shows and lack of corporate sponsorship.

Hands down one of the major music festivals to ever happen in Nigeria, the Music Festival was put together by This Day newspaper and was an annual music festival which held between 2005 and 2008 in Lagos and Abuja with other shows outside the country.

The show was what differentiated the middle class from the elite as tickets were selling for a whopping N50,000 back in 2008 (that’s almost 100,000 Nigerian Naira now) The world-class festival showcased Africa music, fashion and arts with runway shows by top African designers, music performance by the biggest stars and celebrity guest appearance.

The final edition had Mary J Blige and Chris Brown perform in Lagos to some fans. We are not sure what happened to the festival but wouldn’t it be nice to have Beyonce perform once again in Nigeria?

This one was for the People!

While ThisDay and the likes were giving us international artistes and charging an arm and leg, Kennis Music did one for the people. The Annual Easter Fiesta was one to look forward to majorly owing to the affordability and guaranteed fun with top musicians most of who were signed to the Kennis Music Label. They also had a few international stars like Brick and Lace. The concert held for almost 17years before we stopped hearing about Kennis Music much, many people say this happened after Dayo Adeneye one half of the leadership went into politics.

Anyway, there’s no gainsaying that Kennis Music gave Nigerians a major concert and of course they extremely contributed to the Nigerian entertainment industry.

Did you think we were going to skip this?

Now in its 15th year, Rhythm Unplugged is unarguably Nigeria’s longest-running concert. This annual event that has now expanded to a music festival has always been a must-attend show. The organisers, Flytime productions also do a good job bringing international acts grace the stage with top Nigerian musicians, comedians, dancers and celebrities.

The Rhythm Unplugged stage has always been a platform for Nigerian artistes and comedians and has hosted almost all the biggest names in the industry. The next edition billed to happen in December will be a 5-day event with more international acts like Koffee, Maze, Megan Thee Stallion, Boy II Men and top Nigerian artistes like Tiwa Savage and Wizkid.

December is almost here guys, and it gets even bigger with CardiB making an appearance in Lagos, we are here for all of the action!

Did we miss any show? You can comment below.

Date Night: 5 Restaurants in Lagos You Should Try