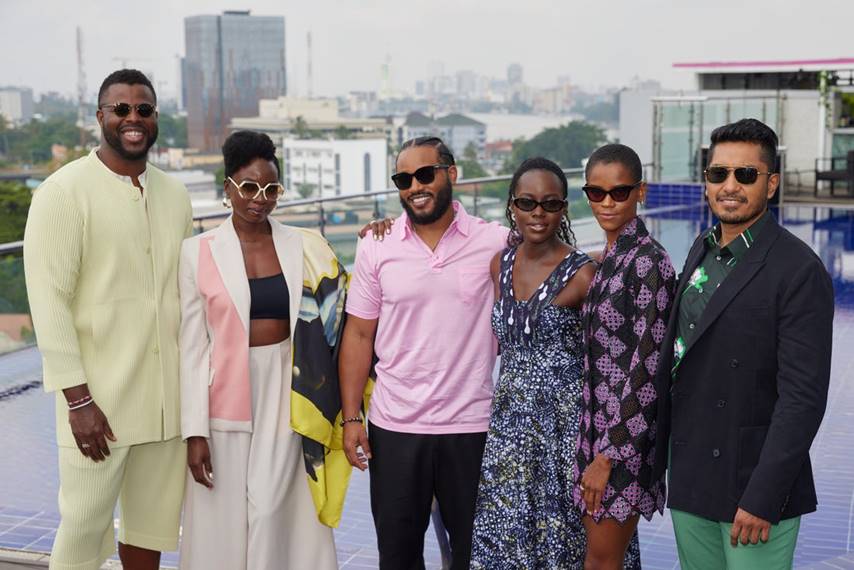 Lagos Welcomes the Cast and Crew of Black Panther: Wakanda Forever Ahead of First Marvel Studios’ Premiere in Nigeria

As a first for Marvel Studios it was announced today that cast and filmmakers arrived in Lagos, Nigeria, to kick off the African talent tour of Black Panther: Wakanda Forever, which will release in cinemas across the continent from Friday, 11 November 2022.

In attendance at the photo call in Lagos were filmmakers and cast from the highly anticipated sequel to 2018’s Black Panther, including stars Letitia Wright, Lupita Nyong’o, Danai Gurira, Tenoch Huerta Mejía, Winston Duke, as well as director Ryan Coogler.

The press conference was followed by a talent and industry-focused press conference hosted by Nigerian radio and television on-air personality, IK Osakioduwa and popular South Africa Radio and Television presenter, Anele Mdoda. Media had the opportunity to engage with talent from the film in a question and answer session, followed by an insightful session that featured director Ryan Coogler, Christine Service (Senior Vice President and General Manager of The Walt Disney Company Africa), Moses Babatope (Deputy Managing Director for Filmhouse Group and Managing Director of FilmOne Entertainment), as well as Chioma Ude, Founder of AFRIFF.

The group is visiting Nigeria for the first time to kick off continent-wide celebrations ahead of Black Panther: Wakanda Forever‘s release. In the film, Queen Ramonda (Angela Bassett), Shuri (Letitia Wright), M’Baku (Winston Duke), Okoye (Danai Gurira) and the Dora Milaje (including Florence Kasumba) fight to protect their nation from intervening world powers in the wake of King T’Challa’s death. As the Wakandans strive to embrace their next chapter, the heroes must band together with the help of War Dog Nakia (Lupita Nyong’o) and Everett Ross (Martin Freeman) and forge a new path for the kingdom of Wakanda. Introducing Tenoch Huerta as Namor, ruler of Talokan, the film also stars Dominique Thorne, Michaela Coel, Mabel Cadena and Alex Livinalli.

Black Panther: Wakanda Forever, directed by Ryan Coogler and produced by Kevin Feige and Nate Moore, releases in cinemas across the continent from Friday, 11 November 2022.