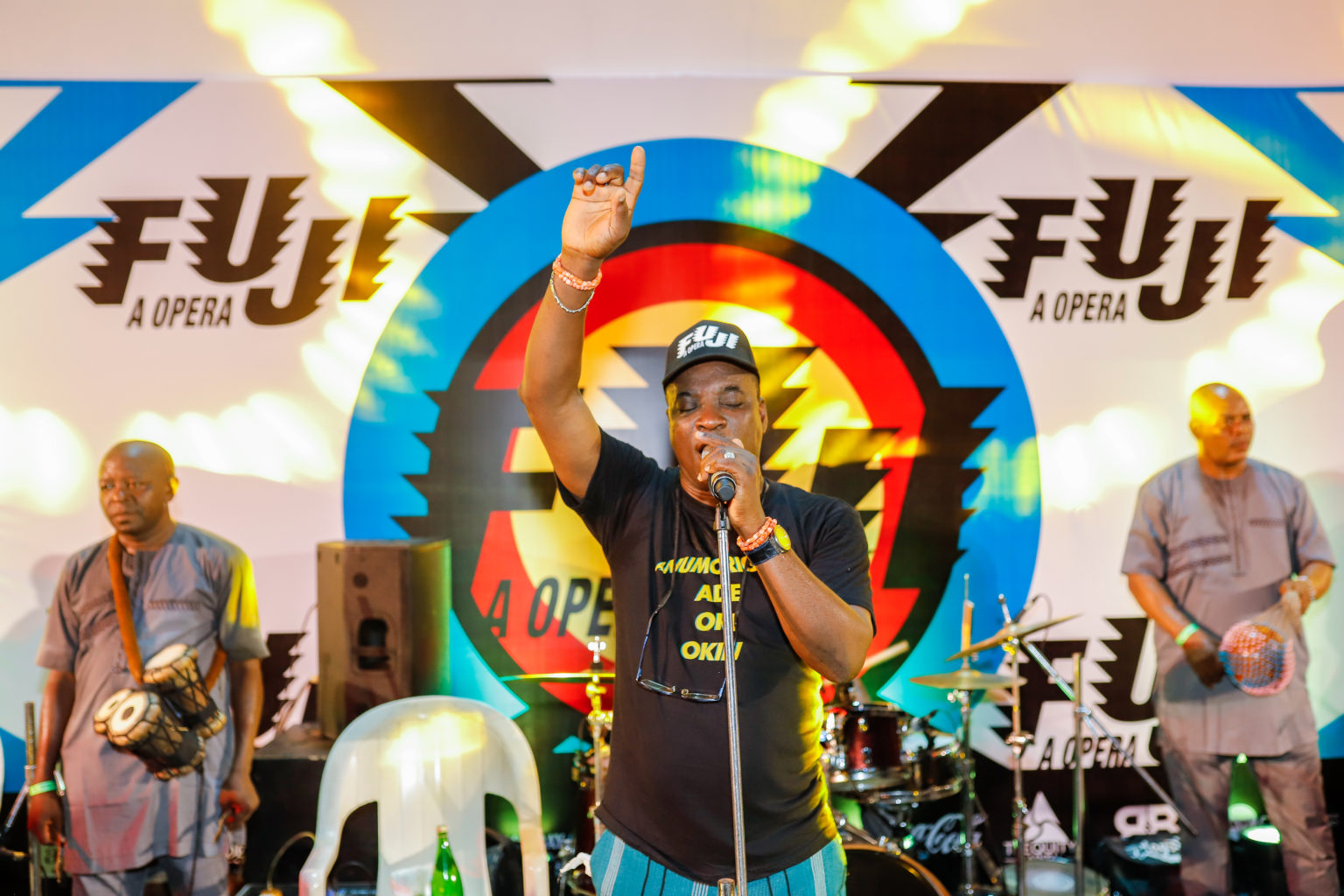 FUJI: A Opera, a multi-platform, multi-media explosion of a culture focused on revitalising and reimagining the Fuji musical genre for a new audience, captured the imagination of Nigerians from December 14 to 19, 2020.

Fuji, one of the most authentic home-grown music genres to have emerged from Nigeria; a rich sub-culture with a belligerent past, arguably originating from the streets of Lagos Island as Ajiwere (folk music for Islamic worshippers at Ramadan), the genre has since undergone a significant transformation, becoming reference sound for contemporary Nigerian pop.

In a 6-day showcase, 3101 Media in partnership with The Fuji Musicians Association of Nigeria, Alliance Francaise de Lagos, Coca-Cola Nigeria Limited, The Wheatbaker Lagos, and Bombay Sapphire, had over 2,000 people walk through its gates in honour of FUJI: A Opera. The week- long homage to Fuji was expressed in, a multi-media installation exhibition, a talk series with K1 De Ultimate, and a live music showcase of the genres lead performers.

The week was declared open on Monday, December 14, by the oldest living Fuji pioneer and performer, General Ayinla Kollington. In attendance at the official week launch were industry practitioners, culture custodians and music fans.

General Kollington was led on a tour of the exhibition by the Creator of FUJI: A Opera, Adeoye ‘Bobo’ Omotayo, who took the 74-year old crooner through a state-of-the-art multi-media installation that explored in great depth the rich Fuji sub-culture through archival recordings, a historical timeline, costumes, and never-seen-before merchandise.

On Tuesday, December 15, FUJI: A Opera received school children from various Lagos schools who were treated to a guided tour of the artefacts on display by FUJI: A Opera volunteers led by Abass Oyeyemi, Anita Udo and Utibe Ekpenyong.

On Wednesday, December 16, a VIP Preview of the exhibition doubled as a celebration of the life of Fuji Music’s creator, the late Lt. Sikiru Ayinde Barrister. The date coincided with the 10th year remembrance of the Fuji icon. A wall mural was unveiled in honour of his legacy by the creator and executive producers of FUJI: A Opera flanked by K1 De Ultimate and the President of the Fuji Musicians Association of Nigeria, Sikiru Ayinde Agboola. A special ‘Creator Award’ was presented to the family of the late hero and received by his eldest son, Rasak Balogun and his two wives and children. On the outdoor terrace, sponsored by Bombay Sapphire was a special Fuji Reimagination set by DJ Aye of VSS where guests expressed what ‘FUJI Means to You’ on Bombay Sapphire easels as part of the Bombay Sapphire Stir Creativity campaign.

On Thursday, December 17, in a 90-minute talk series tagged ‘An Audience with K1 De Ultimate’ moderated by Yemi Shodimu and Lehlé Baldé and in partnership with Universal Music Nigeria; journalists, industry practitioners, investors had a chance to hear the Fuji veteran, and the most successful Fuji artiste of all time, K1 De Ultimate, as he unravelled the genre’s obscure past, threw light on the present and insights for reimagining its future.

On Friday, December 18, the royalty paid a visit to FUJI: A Opera as the team welcomed His Royal Majesty, Alaiyeluwa Oba Saheed Ademola Elegushi (Kusenla III) of Ikate-Elegushi Kingdom. A man who has a deep-rooted relationship with FUJI music was led on a tour by Executive Producer, Tosin Ashafa flanked by the Oba’s white-capped Council of Chiefs.

The grand finale of this landmark week ended with an Invitation-Only live music showcase which featured icons of the genre including Sule Matute, The SK Sensation Band, KS1 Malaika, Saheed Osupa and the headliner act, K1 De Ultimate – on stage for one night only.

The stage was set for the right mood as these veterans treated the crème of corporate and social Nigeria to their signature sounds, rich vocals, and instrumental prowess. It was an evening of appreciation for the Fuji genre.

The evening ended with K1 De Ultimate ushering the creator and executive producers onto the stage for a final sing along to his iconic crowd-pleaser ‘Omo Naija’.

On Saturday, December 19, to close the week, the Honourable Minister of Youth and Sports, Sunday Dare paid a visit to the exhibition and promised to support the initiative going forward.

FUJI: A Opera is back in 2021 with an Original Stage Production and the mother of all concerts.