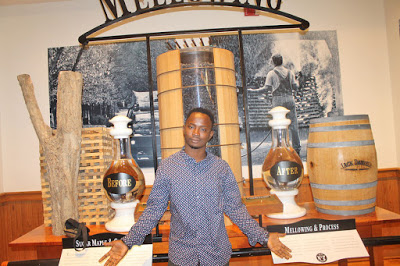 BE REWARDED FOR YOUR PASSION TO COOK! ENTER THE JACK DANIEL’S MASTERGRILLER COMPETITION – N750,000 AND A TRIP TO TENNESSEE, USA UP FOR GRABS | 1st December

Jack Daniel’s hosted the brothers of the grill Mastergriller competition through 2016 with a final taking place in July and a grand champion emerging in the person of Korede Alimi. He won himself a trip to the birthplace of Jack Daniel’s Tennessee Whiskey in Lynchburg, Tennessee and price money of N750, 000.

See pictures from his trip as he visited Brown Forman cooperage (where all the Barrels are made), Jack Daniel’s distillery, attended the Jack Invitational Barbecue competition, Mr. Jack’s gravesite and even met with the Master Distiller Jeff Arnett.

You too can compete for this title as Grand Champion in the Mastergriller Competition which is back on – How to enter?

·           Be one of the first 100 persons to post your best Meat & Whiskey Combo pictures on the JackDanielsNigeria Facebook or post and tag your favourite Meat & Whiskey BBQ Combo with the #BrothersOfTheGrillNG on Instagram.
·          The 20 eligible and most interesting Meat & Whiskey entries selected from all valid entries will be invited to compete for the regional title in Lagos and Abuja
·          Competition is only open to residents of Nigeria 21 years or over. Entry will close November 29, 2017

The competition will take place on December 1 at the Eagles Club field, Surulere

Intending Participants can enter and compete for the N750,000 cash prize and a chance to partake in the Brothers Of The Grill BBQ Master Griller Competition Finale for the Title of Grand Champion with a once in a Lifetime chance to travel and experience the Jack Daniel’s World Champion Invitational Barbecue Event in Lynchburg Tennessee U.S. There are also different assortments of branded grilling tools and merchandise to be won.


This unique event celebrates all BBQ cooks from pros to amateurs.
For more information on this awesome opportunity, check out their Facebook page. Terms & Conditions Apply.

Only Grilling should be messy. Please drink responsibly.